Oh dear. I seem to have fallen hopelessly behind on blogging about Fringe, but hopefully I'll get a chance to do a brief round-up of the most recent shows I've seen tomorrow - which now number 26 in total - on my afternoon off.

Right now, I just wanted to post a photo that made me go squee.

It's from the first epsiode of the new series of Doctor Who - yes, that's right, the one that hasn't aired yet. They're filming it in the UK as we speak.

So, wanna see it? 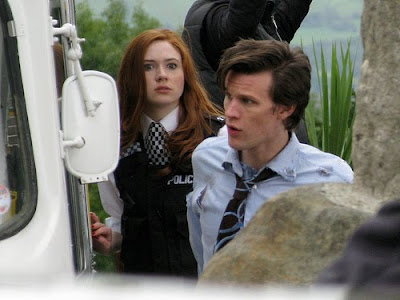 Yep, Matt Smith as The Doctor, and Karen Gillane as Amy Pond. Ain't it grand? Photo taken on set - presumably with a very long lens - by Alun Vega.
Posted by richardwatts at 12:05 am